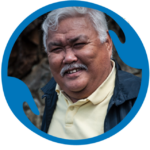 Michael Kusugak grew up in Repulse Bay, a small village in the Northwest Territories (now Nunavut). During his childhood, Michael’s family traveled by dog team, living in igloos in winter and tents in summer. He had no access to books as a child, and didn’t speak a word of English until he was seven when he was sent to a residential school in Chesterfield Inlet. Michael went on to become one of the first Inuit from the eastern Arctic to graduate from high school.

While in school, Michael enjoyed writing stories and poems, but he never thought of becoming an author until he met Robert Munsch. “He stayed with us during Children’s Book Week once, and I told him all kinds of legends. He suggested that I write them down, so we worked on one together, and eventually, it was published!” That story, A Promise is a Promise, is based on one of Michael’s childhood memories. He explains, “I take things that are native to me, such as the northern lights, and create a story around them.” The story appeared in a Hollywood movie, “LEAVING NORMAL,” and was made into a play.

Prior to writing books for children, Michael spent 15 years working for the government in various positions. In his last posting, he was Director of Community Programs for Arctic College. Now he devotes his time to writing, storytelling and speaking to educators.

Michael mesmerizes young audiences with narratives from his Arctic home and tales told with string. He also enjoys hunting, fishing, boating and looking out his study window at the northern landscape stretching towards the horizon. Michael now splits his time between Sooke, BC and Rankin Inlet, Nunavut. 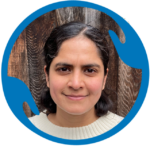 Nandita Bajaj is the Executive Director of Population Balance, a non-profit organization that raises awareness about the impacts of human overpopulation on humans, animals, and the planet. Previously, she was a high school Science and Math teacher and administrator for 12 years in the Toronto District School Board and at University of Toronto Schools (UTS). She has run the Animal Justice Committee at UTS to raise awareness about animal exploitation in education, including introducing dissection alternatives to the Science department. She also serves as a Board member for the Canadian Society for Humane Science. She recently completed her MEd degree from the Institute of Humane Education at Antioch University. She will be joining the Institute for Humane Education at Antioch University as an adjunct faculty member in 2022 to teach her course on ‘Pronatalism and Overpopulation’. 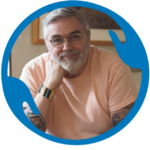 Author, educator, and presenter David Bouchard is a champion of the written word. He is a best selling author with over 50 books in both english and french. His fascinating storybooks are visually stunning and are literally refreshing.

David grew up not knowing anything about his cultural heritage. Yet he strived to discover the bloodlines his ancestors had tried to hide out of fear of being treated unfairly. Ultimately he was able to trace his ancestry back many generations back to the Menominee Treaty of 1848.

Today, David writes amazing books that reflect his roots and Indigenous culture. His books have won numerous awards, including a Special Mention for Non-Fiction in the 2010 Bologna Ragazzi Awards for The Drum Calls Softly.

In 2009, David Bouchard was also named as a member of the ‘Order of Canada’ for his achievement and advocacy in literature for Canadian children. 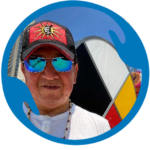 Philip is a member of Moose Deer Point First Nation, born in Perry Sound, and raised in Toronto. Philip is a Young Spiritual Elder, Indigenous artist, activist, educator, historian, and Ancestral Knowledge Keeper. Philip is engaged in creating opportunities for artmaking and teaching methodologies through Indigenous symbolism, traditional ceremonies, history, oral stories, and land-based pedagogy. Citing all of his ancestry, he is Shawnee, Lakota, Potawatomi, Ojibway, Algonquin, and Mohawk. Philip is the seventh generation great-grandson of Shawnee Warrior and Leader Tecumseh, and his ancestor Amelia Chechok is the granddaughter of Chechok who was the first signer of the Toronto Purchase of 1805. 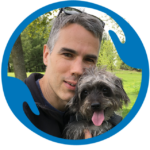 Mike Farley has been teaching middle and high school Geography and Environmental Studies for 20 years in the Toronto District School Board and currently at University of Toronto Schools. Over the past decade he has explored animal protection with his students, including running virtual field trips to animal sanctuaries during the pandemic. Mike is a frequent presenter at conferences in Canada and the U.S. on topics such as human rights, environmental issues, and animal protection. He is currently finishing his graduate degree in Humane Education and working on curriculum projects for the Factory Farming Awareness Coalition.

Mike is also putting together a network of educators from across Canada who are incorporating animal protection into their teaching. In 2014, the Royal Canadian Geographical Society presented Mike with the ‘Innovation in Geography Teaching’ award, the highest honour for Geography teaching in Canada. 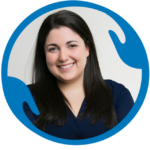 Nogah Kornberg is reimagining teaching and learning as Associate Director at I-Think. Here she works with school board leaders and educators to bridge the gap between academic research and practical application that enables real-world problem solving and metacongition.

Most recently, Nogah is co-lead a redesign of the School Improvement Plan experience for the Keewatin-Patricia District School Board. She led the development of the I-Think Well-Being and Building Community curriculum-connected Challenge Kit series; a scalable resource and experience connecting real organizations with real challenges with students, helping teachers make real-world problem solving core to their classroom. Nogah also led the collaborated with the Ontario Ministry of Education to produce an online video resource highlighting the work of teachers in the I-Think community. The resource names the work of I-Think in Integrative Thinking as a top approach for innovations in thinking and learning.

Nogah received her Bachelor of Education and Masters of Education from the Ontario Institute for Studies in Education, University of Toronto. She holds an Honours Bachelor of Arts from Trent University in History and Indigenous Studies. Prior to I-Think, Nogah was a high school teacher and a co-Founder and Executive Director of the Young Social Entrepreneurs of Canada. 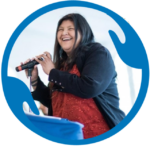 Wendy is of the Bald Eagle Clan; She is Potawatomi and Ojibwa and a proud member of Wasauksing First Nation in the heart of the Muskokas. She is a keeper of the 8th Fire Prophecies, Keeper of the Ancient Thunderbird Calendar, Ceremonial Leader, Spiritual Educator, Cultural Innovator and Traditional Indigenous Healer.

Wendy is a lifelong educator, advocate and supports Traditional Indigenous Ways of Knowing; devoted to improving the quality of life for the next seven generations. In 2018, Wendy was awarded the Community Medal for Scarborough/Guildwood from M.P John McKay and she was also a recipient for the Remarkable Woman Award. 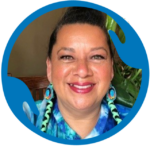 Kim Wheatley is a multi-award winning Anishinaabe Traditional Grandmother and Cultural Consultant with 3 decades of experience. She is a published author, event organizer, public speaker, ceremonialist, handdrummer and singer. Her work has held local, national and international platforms.

Kim is well known in the southern region of Ontario but she is a band member of Shawanaga First Nation Reserve. who carries the spirit name Head or Leader of the Fireflower. As a Mother, Grandmother and lifegiver Kim commits to delivering inspirational support for all walks of life grounding her work on Traditional Indigenous Knowledge belief systems. 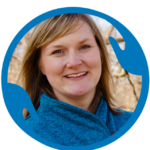 Amanda McKibbon is the Senior Director of Affiliate and Community Outreach at the Ontario SPCA. In this role, Amanda has the pleasure of engaging and collaborating with community and industry partners to improve not only the lives of animals, but also those of the people who love them and the communities in which they live. Amanda also leads a team responsible for humane education programming for youth and adults, including planning and executing the Change for Animals Conference and the development, growth and implementation of  the AnimalSmart™ Humane Education program. Amanda is honoured to work alongside Indigenous Partners and Consultants on behalf of the Ontario SPCA to help guide the organization’s commitment to Truth and Reconciliation.

Amanda, who holds a BA in Psychology and a MSc in Animal Behaviour and Welfare, has focused her career on animal well-being, research and child psychological health. She is passionate about the power of connection, compassion and education to shape a better future for all.