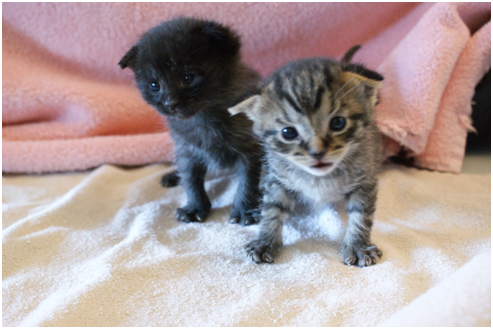 Kittenhood is the best time to teach a cat to acclimate to a variety of new sights, sounds, people and other animals. New experiences create familiarity, and pairing new positive experiences with rewards creates confidence. Cats that have been actively socialized are less likely to be fearful in unfamiliar situations, or uncomfortable with changes in their environment.

The following has been adapted from material on the ASPCApro website.

To ensure that kittens in your care are friendly and well-adjusted:

All animals, including cats, have a window of opportunity at the start of their lives during which they learn to accept things around them so they are not afraid of them later in life.

When to start socialization

Kittens have a prime socialization window which occurs at 2-7 weeks of age but can extend up to 14 weeks. During this time, the kitten is most receptive to new experiences.

In an animal centre environment, it is crucial to take advantage of this window of opportunity to offer the kitten plenty of novel experiences and interactions with people. You can help boost confidence and reduce the development of fears and phobias by providing kittens with a variety of experiences during these early weeks. This will help them adjust to their new home for those first few days or weeks when they are exploring a novel environment.

After the window closes, unfamiliar people, objects and experiences are approached with caution, and the kitten may become fearful. In fact, the most common cause of fear and aggression is lack of socialization.

Keep these interactions short and frequent so as not to overtire the kitten.

Ensure that socialization experiences are positive and that the kitten does not display signs of fear or anxiety in every situation.

The following are important things to remember when socializing kittens:

When the kittens are comfortable with this activity, try lifting while you’re kneeling and then eventually while you’re standing. When the kitten is very full and getting sleepy, try gentle petting and progress to holding and petting without the incentive of food being present. If this works you should be able to try it at other times between meals.

In regards to feral kittens, research confirms that eight weeks is the general cut-off date for socialization, although there are exceptions. Most feral kittens are frightened by interactive play when first exposed to humans. Move slowly, and begin with a toy that isn’t too threatening and allows distance – a toy on the end of a stick, for example.

Be flexible and experiment. Use the toy that proves to be the kitten’s favourite as a reward for achieving new steps.