Excessive urination or absence of urination is not normal and can be life-threatening. Have the cat checked immediately by a veterinarian.

We need to determine whether a cat has a litter box problem or is urine marking. Cats who urine mark also use their litter boxes for voiding, so urine in the litter box does not rule out marking outside the box. Cats “spray” or mark with their urine when they deposit their urine on prominent objects in order to communicate with other cats, define territory or, if intact, when looking for a mate. Other inappropriate elimination, such as going beside the box, or in another room, can be caused by stress, aversion to the litter box or a medical problem.

Indications characteristic of other elimination problems:

What to do for successful litter box use in the shelter:

Communal Room Requirements: Sufficient resources (e.g., food, water, bedding, litter boxes, toys) and their appropriate distribution throughout the space must be provided to prevent competition or resource guarding and ensure access by all animals. There should be at least one litter box for each cat, plus one extra. See Communal Room Set-up for more information.

Meowing and Yowling (Adapted from the ASPCA)

Why do cats normally meow? 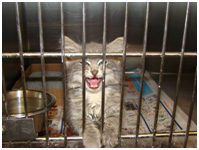 What to do to address excessive meowing or yowling: Excessive meowing or yowling indicates the cat is experiencing a high level of stress. Cats who are left alone for long periods of time each day may be more likely to meow for attention, which is very typical in shelter cats. Implementing Stress Reduction and Enrichment Strategies are imperative for the well being of these cats.

A cat that meows a lot and does not respond to stress reduction and enrichment interventions should be checked thoroughly by a veterinarian to ensure a medical condition is not the cause of the cat’s distress.

What NOT to do: Do not ignore the cat when she meows. In most instances, it’s safest to assume that something is wrong: she may not have access to her litter box, her water bowl may be empty, she may be frustrated from being confined, or something in her environment is causing anxiety or stress. Always make sure that all her needs are met before assuming that she’s just being demanding by meowing at you.