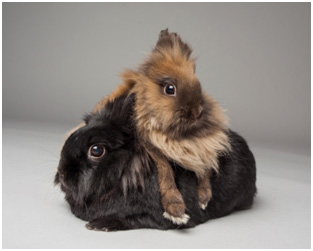 Rabbits are prey animals and timid by nature, so we must be patient if the rabbits coming into our care seem shy at first. Hand-feeding treats helps to engage the rabbit and reinforce social interaction.

Rabbits speak to other rabbits and to humans by using extensive body language and a few vocalizations. The following general descriptions of rabbit language should help you understand rabbit behaviour.

Offensive postures can include: