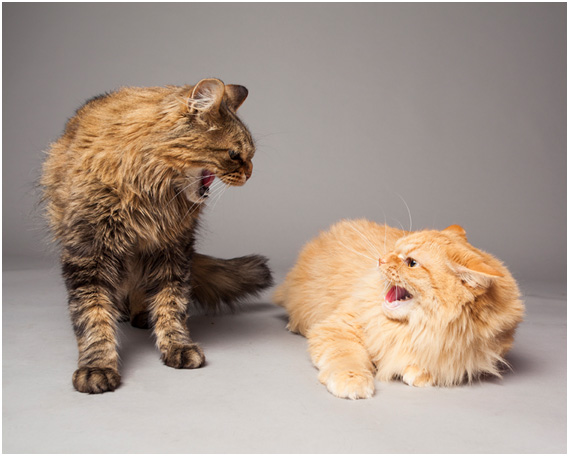 The ability to read feline body language will help you understand what the cat is communicating, and then implement the proper intervention such as enrichment, socialization, or modification.
Understanding what cats are communicating through their body language is essential for cat caregivers:

Body language is made up of cats’ body postures, facial expressions, and the position and carriage of certain body parts, like ears, tail and even whiskers. Cat body language is more subtle than dog body language and can be harder for people to interpret. Knowing the basic postures and what they mean can help cat caregivers deal with problems more effectively and enjoy their cat’s company more fully because they can understand feline communication.

Threats and aggression can be either offensive or defensive. An offensively aggressive cat tries to make himself look bigger and more intimidating, whereas a defensively aggressive cat adopts a self-protective posture and tries to make himself look smaller. A rule of thumb is to not touch, attempt to reassure, or punish cats showing these postures! (Adapted from the ASPCA)

Overt aggression, whether defensive or offensive, includes: