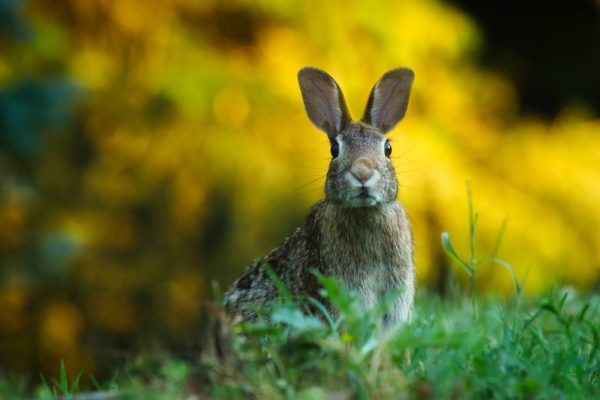 Eastern cottontail rabbits are a native species to Canada and are one of the few wild animals that are known to “play” with other members of their species. Rabbits are also incredibly fast, and are able to reach speeds of 60 to 75 kilometers per hour. This speed is a necessity for eastern cottontails since they have numerous predators and few natural defense mechanisms.

All eastern cottontail rabbits need to have suitable habitat is cover and protection from predators. They are usually found in or near wooded areas and meadows. They have also adapted to increasing urbanization and frequently live in city parks, golf courses and in residential yards.

The diet of eastern cottontails consists mainly of leafy plants, buds, twigs, and bark. They will also feed on garden vegetables and fruit when available.

The breeding season for eastern cottontails begins in February and may not end until September. They are capable of producing three to four litters a year of four to five young each. Contrary to popular belief that they are burrowing animals, eastern cottontail rabbits nest in shallow depressions in lawns and fields. The mother lines the nest with grass and her fur to keep the young warm and covered. She only returns to the nest one to two times a day to feed her young, usually first thing in the morning or during the night. The mother tries to stay away from the nest as much as possible so she does not attract predators to her vulnerable young. The young become independent very quickly compared to other mammals, and within four to five weeks they have matured and have left the nest.

What should I do about rabbits that are eating my garden? It is important to make sure that the animal involved is a rabbit since the steps taken to prevent rabbits from eating a garden will not necessarily be effective if another species is involved. Some clues to determine whether or not it is a rabbit causing the damage:

The best way to keep rabbits and other critters out of your garden is to exclude them with a fence. If you are mainly concerned about rabbits, chicken wire is a suitable barrier. The fence only needs to be about two feet high with support posts approximately every seven feet. You may also want to bury the fence a few inches beneath the ground so the rabbits are not able to squeeze beneath the fence. If fencing is not an option, you can cover the plants with milk jugs with the bottom cut out, or covers can be purchased from garden supply stores.

Repellents may also be used to deter rabbits from your garden. There are many homemade remedies you can try. A diluted solution of hot sauce (one tablespoon of hot sauce in one gallon of water) sprayed directly on the veggies or around the perimeter of the garden may deter rabbits. You can also try equally diluted soap, or garlic. It is crucial to use an appropriately diluted solution to ensure that the animals are not harmed if they ingest any of the mixture. Remember to wash vegetables and fruit thoroughly before consuming them yourself.

Another deterrent method to try is the use of scare devices. Motion-sensitive lights, alarms, or sprinklers can be used to scare rabbits away. You can also build a scare device. Insert a pole into the ground near the garden and attach a metal garbage lid or pie plates by a string to the post. When the wind blows this will create motion and noise to scare the rabbits. You can also use scare tape instead of a garbage lid. Scare tape can be purchased at hardware or garden supply stores. Rabbits are nervous animals so any noisy element introduced to the area will aid in deterring them.

What should I do with the orphaned bunnies I found? Please keep pets away from the nest. Chances are the young bunnies are not orphaned, the mother is usually not seen because she does not want to attract predators to the nest site. If you are worried that the mother is not feeding her young, try placing a twig or piece of string over the nest. If the twig or string is moved the next day the mother is still caring for the young. You can also try sprinkling unscented baby powder or flour around the nest to check for footprints indicating the presence of the mother. If the young rabbits are active and look ‘plump,’ the mother is most likely still caring for them. However, if the string or twig has not moved, there are no footprints, or the young appear lethargic, they may be orphaned.

Never feed wildlife. Their digestive system cannot handle human food and you will make them sick. If you are certain that the mother has been injured or killed, or if the young rabbits have been injured, please call your local Ontario SPCA Branch, affiliated Humane Society or a licensed wildlife rehabilitator.

Three cheers for the volunteers!