When Melissa Gerard adopted Leo through the Ontario SPCA and Humane Society’s Working Cat program, her main goal was to take care of the mice problem in her auto parts warehouse. What she didn’t expect was the chatty, attention-seeking cat she received!

When rehoming animals, the Ontario SPCA strives to find the right home for each animal in its care. Some cats, such as community cats or feral cats, require alternative homes due to their lack of socialization, or because they don’t thrive in a traditional home environment.

As most of the cats that come into the program are former street cats, they have no desire to live indoors. However, even though they may not want to snuggle with you on the couch, they are skilled in keeping vermin problems under control. As such, the Ontario SPCA gives these cats a “job” as working cats.

These cats are spayed/neutered, microchipped, dewormed and vaccinated. In exchange for daily food and water, veterinary care and shelter, they’re ready to go to work providing vermin control at places such as barns, workshops, greenhouses, and garages.

When Leo arrived at the Ontario SPCA, he was extremely fearful and apprehensive of people. He did, however, show signs of warming up to his main caregiver, so the animal care team felt he would be an excellent candidate for the working cat program, and a good fit for Melissa’s warehouse where he could have his space, and also have people to interact with on his own terms.

“We knew we wanted to adopt, and a working cat was exactly what we were looking for,” Melissa explains.

Melissa’s shop is family owned and open seven days a week. She knew it would be the perfect home for Leo as there would always be people around to make sure he has everything he needs. Plus, she was experiencing some problems with mice, which she knew Leo would eagerly solve. She says ever since adopting Leo, she has not seen any mice! 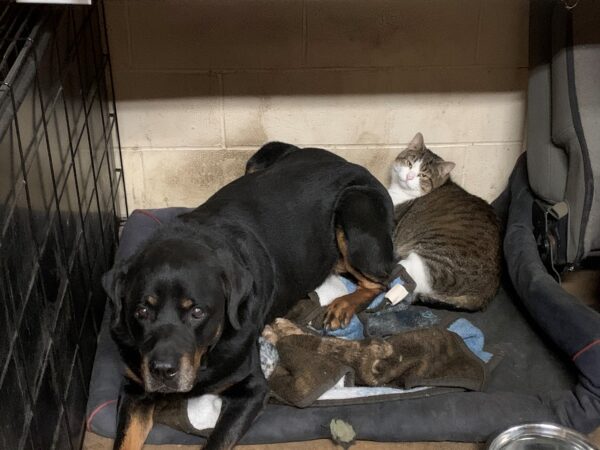 Exception to the rule

While many working cats tend to be elusive, or at least prefer minimal interaction with people, Leo proved to be an exception.

“There were a lot of things that surprised us when we adopted Leo. We had no expectations of him being social or friendly in the traditional sense, and we were okay with that. But, boy, is he friendly!” says Melissa. “He is very chatty, he loves attention, and being patted is a favourite pastime of his.”

Leo settled in quickly to his new home, and befriended Melissa and her family just as quickly.  Not only that, but he is friendly toward everyone he meets at the shop, including Melissa’s 12-year-old Rottweiler, who comes to work every day. On occasion, they even share a bed for short afternoon naps together!

“To be honest I think we really lucked out with Leo. He is social and friendly and very, very chatty! I would recommend the working cat program to any alternative home that might be in need of a working cat!” says Melissa.

Although Leo ended up being quite a friendly cat, that is not usually the case with cats that go through the program, says Monica Seto, manager of the working cat program. Monica says great care and thought goes into deciding what would be the best environment for each cat based on the tools we have to assess these cats while they are in our care. While most cats end up still being quite elusive in their new home, there is the odd time when a cat will significantly warm up to its caretaker and show increased socialization skills.

“What’s great about Leo’s scenario is that Melissa had no expectations that he would be friendly, but was open to providing him the love and attention he needed when he arrived and acclimated. It was a perfect fit for Leo!” Monica says.

Hats off to you

To all kind-hearted and hard-working people at SPCA: hats off to you. I love animals and admire the work you do.