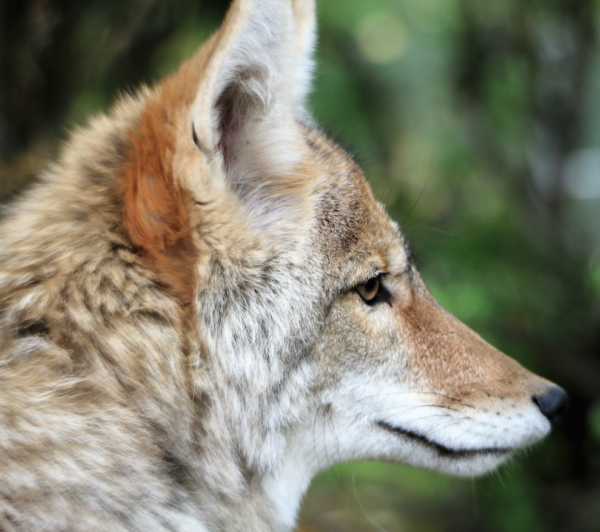 There are few animals in North America that have undergone more extensive persecution than the coyote. Humans have pursued coyotes since the time of European settlement of this continent in an effort to eradicate them due to their perceived negative impact on agricultural activity, such as sheep farming. Despite all attempts to exterminate this fascinating animal, the coyote remains a steadfast resident of our ecosystem. Today in our modern cities and suburban rural areas, coyotes continue to be the victims of bad publicity and general ignorance. If we take the time to appreciate the unique and important role that coyotes play in our environment, perhaps more people would make the choice to co-exist peacefully with them and fewer would call for their elimination.

Woodlots, brush and grassy fields provide attractive habitat for coyotes. Coyote dens usually consist of a burrow in the soil, but may be located at the base of a hollow tree or in a hole between rocks. The coyote prefers to den on the banks of a stream or the slope of a gorge and typically chooses a concealed spot.

The coyote is primarily a flesh-eater but will eat just about anything available. Coyotes eat small rodents, rabbits, hares, insects and blueberries and other wild fruits in summer and fall. Coyotes will also eat carrion and may prey on fawns, adult deer and other large hoofed mammals during certain snow conditions in winter. If available, coyotes may eat domestic livestock such as sheep.

Mating takes place mainly during February and March and pregnancy lasts from 60 to 63 days. On average coyotes bear three to seven pups, covered with fine brown fur, whose eyes remain closed for the first eight or nine days.

Why do some people think poorly of coyotes?

For a variety of reasons, the known presence of coyotes raises alarm in both urban and rural areas. In cities, the sight of a coyote creates a sense of panic among people who are afraid that the animal will attack domestic pets or small children. In rare cases, coyotes have injured children or killed domestic animals, however, there are generally extenuating circumstances surrounding the event. In these cases, it is important to recognize that these are the specific actions of an individual animal – not the entire species.

In farming communities coyotes are a traditional enemy and are often blamed for the loss of livestock. Although coyotes are opportunistic hunters, and will eat farm animals if they are readily available, their diet is composed mainly of rodents. There are also simple steps that farmers can take in order to discourage coyotes from preying on agricultural animals.

How can I prevent/deter coyotes from taking up residence at my property?

Coyotes are adaptable and opportunistic, so the main way to avoid coyote conflicts is to proactively take steps so that they are not attracted to your home in the first place:

If you are worried about the safety of your family, including pets, because of coyotes in the area, there are several precautionary measures you can take:

How can I protect my farm animals from coyotes?

Another important factor for people in all areas to realize is that lethal interference with coyotes does not resolve the situation. Killing coyotes only disrupts the natural social order of the coyotes in the area and can actually create additional problems for people. Trapping coyotes for relocation is never advisable since this practice is not only dangerous and ineffective, but is also illegal in the province of Ontario.

Coyotes have a tremendously positive impact on an area’s biodiversity and ecological integrity and it is time for humans to start seeing these animals as co-inhabitants of the earth, rather than as adversaries. By taking precautionary measures and being intelligent about our interactions with coyotes, we can learn to co-exist peacefully.

Three cheers for the volunteers!