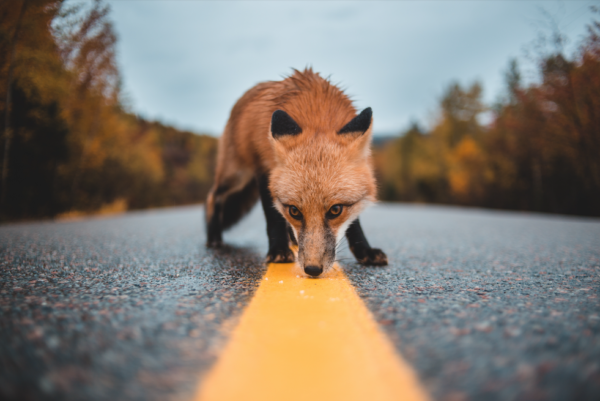 Every year, thousands of wild animals are taken to Ontario SPCA Animal Centre’s across the province because they require care for an injury. In many cases, it is impact with a vehicle on the roads that has caused the animal’s injury. According to the Ontario Ministry of Transportation, there are over 10,000 collisions involving wildlife on the province’s roads each year. This number reflects only those collisions that are reported and generally involve larger animals such as deer, moose and bear. There are, undoubtedly, countless other accidents involving smaller wild animals that go unreported. Collisions are often fatal for the animals involved and can also be hazardous for human drivers. In many cases, these accidents can be avoided if drivers are aware of potential for such collisions and take simple steps to avoid them.

The majority of wildlife-related vehicle accidents in Ontario occur at the beginning and end of the day. Many wild animals are most active in the hours of the early morning and the time following evening sunset. Unfortunately, this is also when visibility tends to be at its worst for drivers. When traveling at these times of day, it is important for drivers to remain alert and watch for wildlife who may venture onto the road. It is always best to drive with caution, but reducing your speed can also mean saving an animal’s life since lower vehicle speed will make it easier to stop if an animal suddenly appears in front of you. It is also important to not overdrive the distance of your lights and to be prepared to use the vehicle’s horn at all times. Be extra careful if you are driving in rural areas where there may be more wildlife activity. Exercise caution when rounding a curve, reaching the crest of a hill, or anywhere else that your visibility is limited. Finally, you may also want to consider taking a defensive driving course to learn techniques and emergency maneuvers that could help you avoid hitting an animal.

Ensure you’re not enticing animals onto the road

Throwing food or food wrappers out of car windows may endanger animals by attracting them onto the road. Household garbage is also a source of attraction for animals on roadsides. Putting garbage out the morning of collection, rather than the night before, and using wildlife-proof containers is a good way to prevent animals from lingering on the roadside.

The Ontario Ministry of Transportation places warning signs in areas where deer and moose collisions are common. Collisions with large animals such as these are especially dangerous and often result in suffering because the animal is often seriously injured, but not killed, by the vehicle. If you see a sign indicating that the area is an animal crossing, it means that at least four animals have probably been struck. Take extra caution in these areas. You may also wish to consider purchasing ultrasonic devices that emit a sound inaudible to humans, but which frightens large animals such as deer. Although their effectiveness with smaller animals is minimal, these devices cause deer to run away instead of remaining “frozen” in the middle of the roads. Ultrasonic devices are available at hardware stores and are a relatively inexpensive way to help prevent vehicle collisions with wildlife.

Urge your local government to plan roads with the interests of wildlife in mind. For example, many wildlife fatalities could be avoided through simple measures such as:

Initiatives have been undertaken in many places in North America, Europe and Australia to protect wildlife from unnecessary motor vehicle collisions. In Canada, the highway that runs through Banff National Park is the best example. According to Parks Canada, proper fencing of the highway and the construction of wildlife underpasses and overpasses have greatly reduced roadkill deaths. Although initially expensive, these measures were put in place because the area public demonstrated that they valued wildlife protection. The 2006/07 expansion of the highway through Banff is also taking wildlife into consideration and special provisions are being made to protect animals in the area both during construction and once the larger highway is completed. This example proves that changes can occur to better protect wildlife and, hopefully, other communities will follow this trend.

Often, concerned motorists do not know what to do when they pass injured animals on busy roads. Sometimes it is impossible to interfere without risking your own safety, so it is important to use good judgment in these situations. If it seems unsafe to stop, find a telephone as soon as possible and call for help. If you do not know the phone number of your local Ontario SPCA Animal Centre, affiliated Humane Society or municipal animal control, dial the operator for assistance. If you have a cell phone, please remember not to use your phone while driving.

If you are able to stop and assist an injured animal, you will need to do so with caution. Wild animals do not understand that you are attempting to help them and they may bite in self-defense. You may want to have the following items in your car in case of emergency:

If you can safely do so, pull over to the shoulder and turn on your four-way flashing lights. If you do not feel comfortable handling the animal and you have a cell phone, call for assistance. If the animal cannot be moved, place a flare or pylon near the animal until help arrives. This will alert traffic and reduce the animal’s chances of being hit again.

If the animal appears non-aggressive and is small enough to carry, carefully place her in a towel lined box and drive to a nearby Ontario SPCA Animal Centre, affiliated Humane Society or veterinary clinic. Otherwise, carefully place the animal on the stretcher board and drag him off the road. Moving dead animals to the side of the road can also prevent further accidents. An animal’s mate or young are at risk if they venture out onto the road in an attempt to help their family member. Predators and domestic animals are also at risk if an animal’s body remains on the road and serves as a source of interest to them.

Turtles, frogs and other slow-moving animals are frequent victims of vehicle collisions. Whenever possible, take time to help them cross the road, but do not pick up snapping turtles as they bite and can cause serious injury. Use a large stick or shovel to push snapping turtles across the road by gently pressing against the animal’s shell. Always move the animal in the direction in which she was headed initially, otherwise, she will only turn around and go back across the road.

Give wildlife a voice

Talk to your friends and family about wildlife friendly driving habits so that more people are taking steps to help protect wildlife!